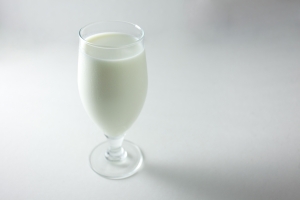 Almond milk is an incredibly popular substitute for traditional cows’ milk. It is used by vegetarians and vegans, people who are following the Paleo diet and people who are lactose intolerant. Almond milk may sound like a fashionable invention, but it has actually been around since the Middle Ages. It is simple to make, and is relatively low in calories and fat compared to many milk substitutes.

Almond milk is made by grinding almonds into flour and adding water. It is a surprisingly tasty milk alternative, and one that offers many nutritional benefits. This milk is naturally free from casein, which is a substance that many people are intolerant to. If you are gluten intolerant, there is a high chance that casein will also cause digestive issues and that cutting out dairy products (especially milk and cheese) will help to solve your problems. Switching to a non-dairy or “free from” milk variety is a good option. Almond-based milks are particularly good because they are a rich source of omega-3 fatty acids. A serving of almond milk contains around one gram of dietary fibre and one gram of protein.

Other nutrients found in this kind of milk include vitamin E, iron, zinc, manganese, magnesium, potassium and phosphorous. In addition, the milk contains several flavanoids and anti-oxidants. The flavanoids in the milk have been found to help reduce cancer risks, and the anti-oxidants protect your body’s cells from damage caused by free radicals. Every day, we are exposed to free radicals in the form of pollution in the air that we breathe, and even the food that we eat. Anti-oxidants help to stave off the effects of aging and keep us young and healthy for longer.

Many commercially produced milks have vitamin D and calcium added to them through a process known as fortification. This is particularly common in products aimed at children, because calcium is something that parents expect their child to get from milk. If you are following the Paleo diet, you can make your own milk at home using almond flour, or purchase pure, unfortified milks instead of processed drinks. You do not need to worry about the extra nutrients if you are following a rich and varied Paleo diet.

You can use this milk alternative for anything which would call for traditional milk, from tea to dessert recipes. If you follow the Paleo diet, then you probably do not eat cereal or oats, but it may be useful to be aware that milk alternatives work well on those breakfast meals too. Many people find that almond-based milk alternatives taste richer and thicker than soy or rice-based milks.

Since this milk alternative is fairly low in fat and calories, it is a good option for people who are trying to lose weight, whether they are following a full Paleo diet regimen or not. Cows’ milk, even in skimmed or semi-skimmed form, is quite calorie-dense, while non-dairy alternatives offer the same luxurious taste for a fraction of the calories.