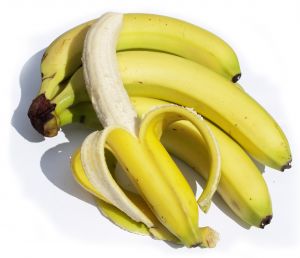 Humans have been eating bananas for thousands of years. The first evidence of the growth of domestic banana crops can be traced back to the Kuk Valley in New Guinea, where humans began growing bananas in 8,000 BCE. There is evidence of similar domestication taking place in the South Pacific and South-East Asia during that time period too, but the crops grown in New Guinea spread quickly to the Philippines and from there across the tropics.

The origins of the banana crops that we eat today are difficult to trace because humans manipulated domesticated banana crops by culling and planting a range of varieties, producing hybrid crops until perfection (meaning large crops of sweet, seedless fruit) was achieved. Modern-day bananas are descended from the seedless plantains that were originally grown in New Guinea. The seedless plantains that are popular today come from the Musa Acuminata and Musa Balbisinia varieties. Wild bananas such as the Musa Sapientum and Musa Paradisiaca, which are bulbous and have large seeds, are not usually eaten.

Banana and the Paleo Diet

Originally, banana was eaten as a staple starch in tropical climates. Today, they are still an important part of Asian diets and they can be a good part of a Paleo diet. They are frequently consumed fried or baked in their skin. They are also used as filler, in a similar fashion to potatoes. In the West, they are seen as a sweet treat or a snack. They are used in fruit salads and other desserts, added to cereals and pancakes or blended into smoothies.

The banana is rich in vitamin B6, vitamin C, potassium, manganese and soluble fibre. A high-fibre diet can help to reduce your risk of some kinds of cancer, including renal cell carcinoma and colorectal cancer. It can also help to reduce the symptoms of GERD, thereby cutting your risk of oesophageal cancer.

Some women find that the calcium and potassium in a banana can help to reduce cramps and alleviate PMS symptoms. Eating a banana can also help to regulate your blood sugar, which makes you less susceptible to mood swings. The vitamin B6 content helps your body to produce white blood cells, boosting your immune system.

One little-known health benefit of plantains is that they contain tryptophan. This is a natural mood enhancer. If you’re feeling down or stressed out, then snacking on a banana is a better cure than snacking on chocolate or crisps. As an added benefit, it’s better for your waistline too.

Bananas are convenient and also very healthy. They are one of the few foods in nature that come with their own easy-peel wrapper. If you don’t like eating oranges because they’re messy and find that apples get bruised in your bag, why not take bananas to work instead? A banana contains around one-third of the calories of a typical chocolate bar and offers far more essential micronutrients. It’s one of the best Paleo diet snacks out there.