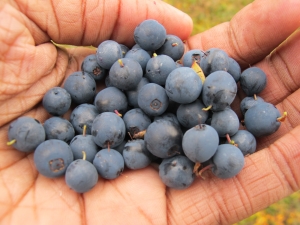 Blueberries may not look particularly impressive, but these tiny, tasty and tangy berries are incredibly good for you. Blueberries are crammed full of vitamins and antioxidants. Even before people knew what antioxidants were, they used blueberries to treat coughs and colds.

Blueberries are one of the few fruits which grow natively in North America. This fruit has been an important part of Native American culture for hundreds of years and is now popular in many other parts of the world too. The Native American diet is, essentially, a form of the Paleo diet, since they rely exclusively on fresh, local produce that is in season. Native Americans intuitively understand the power of blueberries and enjoy numerous health benefits because of this.

A blueberry might taste sweet, but it has a low glycemic index. Foods with a low GI are a good choice for people with insulin-sensitivity issues. If you are overweight, diabetic or at risk of developing diabetes, then eating cane sugar or foods sweetened with high levels of fructose corn syrup can cause insulin spikes and affect your body’s ability to regulate its own insulin levels. Low GI foods release their sugars more slowly, making the job of blood-sugar regulation much easier.

The real health benefits, however, come from the vitamin C and antioxidants found in the berries. These antioxidants can help with cell repair, have anti-aging properties and are good for your brain. One study, conducted on people aged 70 and over, found that after twelve weeks of eating a serving of fresh blueberry every day, the memory and cognitive function of the participants improved significantly. For the purposes of the study, a serving was two and a half cups of berries, which is a large amount – but the results are significant. Regular berry consumption helps to slow down the effects of ageing.

Many of the phytonutrients contained in berries have anti-inflammatory properties, as well as antioxidant properties. In addition, they offer many cardiovascular benefits, helping to increase the levels of HDL cholesterol in your blood, lower your triglyceride levels and maintain healthy blood pressure.

Berries as Part of the Paleo Diet

Many Paleo diet advocates encourage newcomers to avoid eating large amounts of fruits and berries because of the sugars those foods contain. The blueberry, however, is one that you should make an exception for. Just as Native Americans made blueberries an important part of their diet (at least when the berries were in season), you should too.

The antioxidants found in each berry can survive being frozen, so it is all right to buy berries in bulk, freeze them and then defrost them as you need them.

Be wary of commercially produced fruit juices that promise the health benefits of ‘superfoods’ such as blueberry or acaii berries. These juices are usually heavily processed, filtered to remove the skin (which is one of the most nutrient-rich parts of the berry) and full of sugar. Stick to pure, whole berries and if you must drink juice, then make your own.