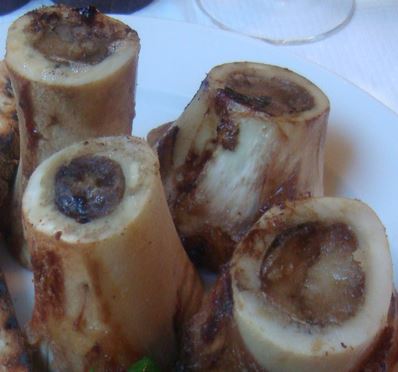 Bone marrow is not something that most Westerners eat on a regular basis, but the popularity of the Paleo diet has encouraged people to explore adding marrow-based recipes to their culinary repertoires. Bone broths and soups are particularly popular, but are they safe to eat?

The Benefits of Bone Marrow

Bone broths are created by submerging animal bones in water and letting them simmer for up to 48 hours. This causes minerals to seep out of the marrow. The bones are rich in calcium, phosphorous, collagen, magnesium, chondroitin, keratin, glucosamine and hyaluronic acid.

Marrow can also be eaten directly. There are some restaurants that serve bones split lengthwise, allowing diners to scoop the marrow out with a special spoon. Roasted bones, seasoned with salt and lemon, can be a great Paleo diet dish and incredibly tasty. Eating the marrow in this way is satisfying and provides direct access to the nutrients without having to worry about the risks associated with boiling bones.

Bone marrow is high in fat, and this means that many modern-day nutritionists warn against eating it, but these cautions are unnecessary. Fat is not the enemy, and eating fat does not make you fat as long as you are in a calorie deficit. The fat in bone marrow serves several purposes. Firstly, it helps to fill you up, stopping you from feeling the need to snack on carbohydrate-based, calorie-dense snacks later in the day. Secondly, it contains fat-soluble nutrients, as well as components necessary for hormone production. Our ancestors ate bone marrow because they needed the calories in the fat and the nutrients. The Paleo diet involves eating the same foods as our ancestors, and to ignore fats would deprive our bodies of essential nutrients.

The Risks of Consuming Bone Broths

Unfortunately, commercially produced bone broths aren’t quite as wholesome as they sound. A study published in the Medical Hypotheses journal has raised some concerns about the safety of commercially made bone broths, citing the possibility of lead contamination. Lead poisoning can cause memory impairment, depression, gastrointestinal problems and reproductive issues.

Animal bones contain lead, and when the bones are soaked in water the lead seeps out into the broth. Normal “safe” tap water contains lead at an amount of around 89 parts per billion, while bone broth contains around 700 parts per billion of lead. This is not an unsafe amount ? tap water is legally allowed to contain as much as 1500 parts per billion, but it is a greatly increased amount of lead, and the increased exposure is not without risk. If you are pregnant, you might want to avoid consuming bone broths. Young, healthy people without pre-existing health conditions should be able to safely eat bone broths on an occasional basis, but the potential health risk from lead exposure is worth being aware of. Eating bone marrow instead of drinking broths may be a better idea.