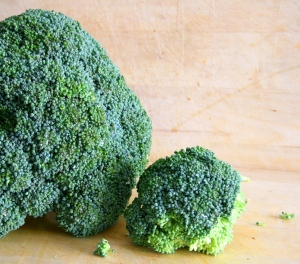 Broccoli is perhaps one of the most misunderstood vegetables in the Western world. Most adults have a strong distaste for this green plant because it has been abused by canteen cooks and school dinner ladies for decades. When it is cooked properly it is a tasty and nutritious food, but all too often it is boiled until it becomes a soggy, tasteless mess that has had most of the nutrients soaked out of it. If that’s the opinion you have of this misunderstood green plant, read on to learn what you’re missing out on!

The History of Broccoli

This edible green plant is a part of the cabbage family. In fact, the name comes from broccolo, which literally means “the flowering top of a cabbage“. It is usually boiled or steamed, but can be stir-fried and can also be eaten raw. Both the head and the stalk are edible. The leaves of the plant have a more bitter taste than the rest of the plant and are usually discarded, although they are actually safe to eat. Some people do like to cook the leaves and use them in a similar way to kale or chard.

The plant is a cool-weather one that does not grow well in the summer. It grows best under an average temperature of between 18 and 23 degrees Celsius. When the plant shows a cluster of flowers in the middle, and the flowers are green, this means that it is ready to harvest.

The plant has been cultivated commercially since the 16th century, but the food did not become popular until relatively recently. Historically, it was thought of as an Italian variation on asparagus, and it was not until the 1920s that it became a popular food in its own right. In recent years a hybrid called the broccoflower, which is related to cauliflower, has been developed. There is also another trademarked hybrid that is closely related to kale. These hybrids may not be traditionally a part of the Paleo diet but they offer some interesting culinary options for people who like to experiment with new foods.

This superfood has a lot of health benefits associated with it. Not only is it a good source of both vitamin C and folate, but it is also rich in vitamin A, vitamin K, calcium, beta carotene, fibre and the antioxidants sulforaphane and indole-3-carbinol.

Eating non-starchy vegetables can help to reduce your risk of several cancers, including stomach, mouth and throat cancer. The World Cancer Research Fund has reviewed the evidence of several studies and believes that a diet rich in vegetables is beneficial. However, they want to see more clinical trials regarding the benefits of the compounds found in broccoli specifically to see whether there are any benefits associated with that food individually.

Eating this superfood has been found to help lower the levels of triglycerides and cholesterol in the bloodstream of people with diabetes. This is important because triglycerides are associated with an increased risk of cardiovascular disease. The antioxidants in the food are also associated with reduced damage to small blood vessels. However, the trials that studied this performed tests using sulforaphane directly to human blood vessels that were being incubated with sugar. Testing has not been carried out on humans with diabetes.

Superfoods are a popular part of the Paleo diet, and it is always worth looking at the evidence with a critical eye as some claims are unsubstantiated. In this case, many of the health benefits have been proven in clinical trials, and you are looking at a vegetable that is versatile and affordable. It can be added to curries and soups, served as a part of a traditional meat-and-two-veg meal, used in stir fries or served with cheese and olives for a super-nutritious meal.

As with any vegetable, if it is picked fresh it will not keep very long. The best way to preserve the nutrients is to mist the heads of the flower and then wrap them in damp paper towels and keep them in the fridge. Do not put the plant in a sealed plastic bag because the lack of air circulation will make the plant go off. A perforated plastic bag is an acceptable alternative to paper towels, however. You should aim to use the plants within two or three days. The sooner you use them, the crisper and tastier they will be.

If you decide to freeze the vegetables, cut them into small pieces and then steam or blanch them for five minutes. After cooking them, plunge them into icy water to cool them down, drain them thoroughly and then put them into a sealed bag or container. Once frozen, they should keep for up to twelve months. Try not to repeatedly defrost and re-freeze them because this will ruin their taste and texture. The plant should taste good after a single freezing, but each time they defrost this can damage the collagen in the plant, making it limp and soggy, which is exactly what you want to avoid with vegetables!

The best way to cook vegetables is to steam them or to cook them in a pressure cooker. Boiling vegetables can result in a lot of the nutrients being damaged or absorbed by the water. If you must boil vegetables, try to use the water to make your gravy so that you don?t lose all of the nutrients.

Stir-frying green vegetables can cause nutrient damage because of the high temperatures that the vegetables are exposed to. Choose a lower-heat skillet, and limit the cooking time to no more than three minutes.

If you are following the Paleo diet then you probably already eat a lot of green, leafy vegetables, as well as peppers, onions, cabbage and more. The Paleo diet involves eating foods that are as close to their natural form as possible, and broccoli is a good choice for this. It?s time to give this super-food a second chance!