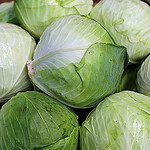 Cabbage is a green (or sometimes purple) biennial vegetable that is popular because of the dense, leafy head that it produces. The most commonly grown variety of this vegetable is the brassica oleracea, but there are some other versions grown around the world. An individual head can be as small as 0.5 kilograms, or weigh as much as four kilograms, depending on the environment that it is grown in and the variety being cultivated.

Each year, around 70 million tons of cabbage will be grown around the world. Brassicas are consumed in Europe, America and even Asia. They can be pickled, steamed, stewed, braised, fermented or even eaten raw.

It is thought that Europeans were growing domesticated varieties of the brassica as early as 1000 BC. However, the savoy was not developed until much later — sometime in the 16th century. The vegetable grew massively in popularity during the Middle Ages and became an important part of European cuisine.

The popularity of this vegetable is particularly interesting when the challenges of growing it are considered. The plant can easily cross-pollinate with other cole crops, so it must be kept separate as much as possible. It is vulnerable to nutrient deficiencies, and it is also highly susceptible to fungal disease and to damage from pests.

How Cabbage Is Grown

While this plant is a biennial crop, it is sometimes grown on an annual cycle, with the heads picked and pickled after a year. Some plants from each crop are left to grow for a second year to produce seeds, however.

Some varieties of this plant enjoy light sand, while others grow better in heavy clay. However, all varieties require fertile ground where the pH is somewhere between 6 and 6.8. The plant requires nitrogen, potassium and phosphorus and grows better in mild temperatures. Exposure to overly high or low temperatures can cause the plant to flower too early, which is undesirable.

To prevent premature flowering, plants are usually started in carefully selected protected locations and will be transplanted later in the growing season. Seeds are usually placed 12 to 24 inches apart to ensure that each plant has adequate access to nutrients.

This vegetable is an incredibly good source of vitamin C, vitamin K and fibre, offering more than one fifth of the recommended daily amount of these nutrients. It also provides a substantial amount of vitamin B6 and folate.

In addition to these nutrients, this vegetable also contains several phytochemicals, and scientists are currently researching the possibility that those phytochemicals may help to fight against cancer. Preliminary research suggests that glucosiinolates could help to prevent colorectal cancer by stimulating the production of certain enzymes which help to remove carcinogens that are produced as a natural by-product of metabolic processes.

Another nutrient which is thought to have cancer-fighting properties is the group called anthocyanins, of which indole-3-carbinol is one. This nutrient has been found, in initial laboratory studies, to help with DNA repair. It is important to note that boiling can reduce the amount of these phytochemicals in the food.

While most people today think of the cabbage as being an edible vegetable, it was used for medicinal purposes for many years. In ancient Greece, it was used as a laxative because of its high fibre content. It was also used to treat mushroom poisoning, and was even added to liniments because it was thought to help bruises heal more quickly. The ancient Egyptians would consume large quantities of this vegetable to reduce the intoxicating effect of wine.

During World War I, leaves from the vegetable were used as a soothing bandage or compress to treat trench foot and ulcers. Even today, some people use it to soothe abscesses and even to prevent sun stroke.

The Paleo diet is a diet which is best summed up by the motto “eat like a caveman”. Essentially, Paleo diet followers use one simple rule when they are deciding whether or not a food is suitable for consumption. If the food is something that would have been consumed by our ancestors thousands of years ago, then they will eat it. If it is a heavily processed item, a grain that is eaten only because of modern agricultural practices or something that contains artificial ingredients, then they will not eat it.

It is important to note that there are some food-borne diseases that spread easily on the leaves of this vegetable. Listeria and e-coli are two of the most common. Plants can be contaminated at any point during the growing, harvesting and packaging processes, so it is important to wash the food thoroughly before consuming it. If you plan on cooking the leaves, make sure that they are warmed right through and cooked at a high enough temperature to kill any bacteria that may remain on the surface.

Some pre-packaged coleslaw mixes have been contaminated with clostridium botulinum. This is a difficult type of bacteria to destroy, and it thrives in anaerobic conditions. However, people following the Paleo diet are unlikely to be exposed to this bacteria because of the lack of processed and pre-packaged food in their diets.
photo credit: cabbage 2 via photopin (license)