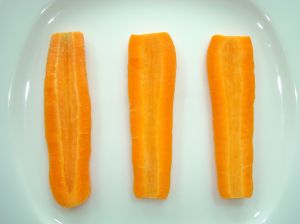 Carrots are perhaps the most highly regarded root vegetable in the Western world. Many children grew up being told, “Eat your carrots, they’ll help you see in the dark”. The idea that carrots improve night vision entered popular culture during World War II, when the RAF spread a story about their pilots eating large amounts of the vegetable so that they could see in the dark and shoot down German aircraft at night. This story was spread in an attempt to cover up the RAF’s use of radar technology, but there is some truth to this old wives’ tale. The carrot contains a lot of beta-carotene, a nutrient which is converted into vitamin A inside our livers. Vitamin A is then converted into rhodopsin, the purple pigment used in the retina to improve night vision. Consuming large amounts of beta-carotene-containing vegetables also helps to protect you against cataracts and macular degeneration, preserving your eyesight as you age.

There are more benefits to eating the humble carrot than just good eyesight, however. The combination of vitamin A antioxidants can help to improve your complexion, protect you from the effects of aging and even help to fight cancer and heart disease. Another, less well-known, use for carrots is as an antiseptic. The antiseptic properties of this vegetable make it a popular herbal remedy in many tribal and ethnic cultures, and varieties of the vegetable are eaten all over the world, from Europe to India.

Carrot in the Paleo Diet

The Paleo diet is a lifestyle choice that involves eating whole, unprocessed, natural foods. Paleo diet followers avoid artificial colours and flavourings, foods that require large amounts of processing before they can be eaten and foods with a high starch content. The idea behind the Paleo diet is that you eat the same foods that your caveman ancestors ate. Those foods contained enough nutrients to keep your ancestors fit and healthy, and allowed them to live a much more active lifestyle than most of us live today. Modern processed foods contain many unnecessary chemicals and flavourings, which can be harmful if eaten in excess.

Carrot is most definitely considered an acceptable part of the Paleo diet. This vegetable is easy to cultivate and stores well so it can be eaten all year round. A carrot is typically made up of about 88 per cent water, 7 per cent sugar, one per cent fibre, one per cent protein and trace amounts of fat. There are more than 100 species of carrots in the world, and not all of them are orange. Some are white, purple or even red. Each variety has a unique flavour, so you won’t have to get bored of eating this vegetable.

Carrots can be eaten raw or cooked. Steaming, pureeing or juicing them is a good choice. Contrary to popular belief, cooking carrot in fat can be good for you. The act of cooking the vegetable breaks down the protein sacs containing the most important nutrients, and the fats help the body to absorb carotenoids, which are a fat-soluble nutrient.