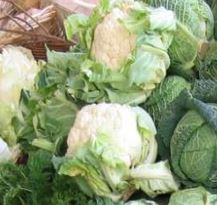 Cauliflower is a vegetable that belongs to the Brassica oleracea species, which is a part of the Brassicaeae family. It is an annual plant, and it is quite hardy and easy to grow. In most cases, only the head of the cauliflower is eaten. Cauliflowers are considered to be an incredibly healthy and nutritious food, and they are not particularly calorie-dense. A 100 gram serving contains just 25 calories and is rich in vitamins and minerals.

The History of Cauliflowers

Cauliflowers can be divided into several different groups, including the Italian and Asian varieties as well as the Northern European Annuals and the Northwest European Biennials. Each has its own taste and appearance. The Italian variety is the original variety from which the others were bred.

Most cauliflowers are white, but some varieties are orange, green or even purple. There are special varieties which are cross-bred with broccoli or other vegetables for a special taste. The vegetable’s history can be traced back to the wild cabbage, a plant that originated in Asia and more closely resembles collards and kale rather than the vegetable of today. Over several centuries it was bred and transformed, until it became a staple of the diet of the Turkish in 600 BC. The vegetable did not gain popularity in Europe until much later. In the mid 16th century it was popular in France, and it became commonly cultivated in Britain and Northern Europe shortly after. From there it spread to the United States and today it is also popular in India and China.

This tasty vegetable is very low in fat, calories and carbohydrates and also very nutrient-dense. It contains a significant amount of vitamin C, folate and dietary fibre, as well as several important phytochemicals that help to protect the immune system and are beneficial to human health in general. Important nutrients include the following:

The dietary fibre content helps to aid digestion, improve bowel regularity, help with the feeling of fullness (and therefore diet adherence) and also protects against certain cancers of the digestive system.

Sulforaphane is released when the vegetable is chopped or chewed. This nutrient is thought to help to protect against certain cancers.

This chemical is thought to enhance DNA repair, and is known to act as an oestrogen antagonist. It has been found to slow the growth of cancer cells.

Cauliflowers also contain a lot of vitamins, minerals and antioxidants. They are a good source of vitamin C, vitamin K, folate, B6 and pantothenic acid, as well as choline, omega-3 fatty acids, manganese, biotin, phosphorus, magnesium and niacin. Considering the low calorie content of the vegetable, this is a particularly impressive nutritional profile and it is well worth adding to your diet. These nutrients can help to boost the immune system, contribute to healthy teeth and bones and protect against cancers. This humble vegetable may not have the same reputation as, say, acai, as a superfood, but it offers many of the same benefits.

Because cauliflower is rich in vitamin K, it offers several anti-inflammatory benefits. Vitamin K and glucosinolates are both good for reducing inflammation. Vitamin K acts as a regulator for the body’s natural inflammatory response, while glucobrassicin can be easily converted to ITC in the body, and this compound can help to stop inflammatory responses when they are still in the early stage, thereby helping to reduce the risk of cancer and cardiovascular disease.

Another cardiovascular health benefit of this food comes from the omega-3 and vitamin K in the vegetable. Not only is there an anti-inflammatory benefit, but there is some evidence to suggest that these compounds, along with sulforaphane, can help to reverse blood vessel damage.

The heath benefits of this particular vegetable are still being studied, but there is preliminary evidence to suggest that it can help to alleviate the symptoms of Crohn’s disease, IBS, insulin resistance, metabolic syndrome, ulcerative colitis and diabetes.

Try to look for clean, white cauliflowers with a compact curd. Ideally, the bud clusters should not be separated. Do not purchase a plant if it is dull-coloured, spotted or has small flowers on it. Thick green leaves are a sign of freshness. Size is not particularly important, as a plant can be small and still be nutritionally valuable.

Uncooked plants can stay fresh for up to one week if they are kept dry and stored in a refrigerator. For maximum protection, keep them wrapped in paper or in a plastic bag. Store them with the stem side down to stop excessive moisture build-up.

Cauliflowers are an ideal addition to the Paleo diet. They are a versatile vegetable that can be mashed and eaten as a side dish, added to curries and pizzas, served with cheese or used in stir fries. The plant naturally contains some purines, and this means that some Paleo diet purists recommend avoiding consuming it in excess. Purines can be broken down to form uric acid, which can aggravate gout in people who are prone to it. If you suffer from gout, then you should avoid consuming a large amount of purine-rich foods. However, in moderation most of these foods are safe. Drinking lots of water and eating a varied diet can help to reduce the problem. Cruciferous vegetables do not harm thyroid function in people who are not prone to gout, so can be enjoyed quite freely.