Celiac Disease And How The Paleo Diet Can Help 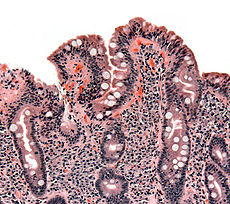 Celiac disease is an auto-immune disorder which affects the small intestine, preventing the body from being able to properly absorb nutrients from food and causing the immune system to attack the gut when gluten is consumed. People who suffer from this condition, which is sometimes referred to as coeliac disease, often experience constipation or diarrhoea, stomach pains and fatigue.

Celiac disease is difficult to control. Currently, the only treatment that has been found to be effective in the majority of sufferers is to maintain a gluten-free diet. Adhering to a gluten-free diet can be difficult, especially considering that food manufacturers cannot agree on the definition of “gluten free” and many products labelled as such contain small amounts of gluten. While many people can tolerate trace amounts of gluten, there are some celiac sufferers whose symptoms are triggered by even tiny amounts.

How the Paleo Diet Can Help

The Paleo diet involves eating unprocessed, natural and in-season foods as much as possible and avoiding refined carbohydrates, grains and other processed foods. Following this diet automatically removes the risk of consuming foods containing gluten.

Many celiac sufferers find that their symptoms are triggered by ready meals and even sauces and spreads that have trace amounts of gluten added to them. The Paleo diet teaches you to cook from scratch and encourages the avoidance of wheat, rye, barley and other foods which contain gluten.

In addition, this diet is legume-free and generally dairy-free too, ensuring improved GI tract function. Instead of eating foods that leave you feeling sluggish and bloated, you will be following a high-fibre, high-protein diet that will improve the way your gut functions and get you back on track towards feeling healthy and energised.

When many people are diagnosed with gluten intolerance, their first move is to purchase gluten-free alternatives to all of the products that they usually eat. However, if you do not get a prescription for these, then your grocery bill will increase significantly. Instead of trying to substitute your usual grains with gluten-free variants, why not try other foods instead?

What Can Celiac Sufferers Eat?

People with celiac can actually enjoy quite varied diets, as long as they are willing to cook food from scratch. Unprocessed meat, fish, rice and fresh fruits and vegetables are all gluten-free and should not trigger a sufferer’s symptoms. With the exception of rice, these foods are all a part of the Paleo diet, in varying quantities.

A simple diet consisting of meat and green, leafy vegetables can be satisfying and provides you with all of the key nutrients your body needs. Add tubers, nuts and a small amount of fruits and you have a diet that is easy to follow, healthy and leaves you feeling satiated.

It can take several months for the gut to repair itself, especially if your condition went undiagnosed for a long time. However, with a consistent, healthy, gluten-free diet you can repair most of the damage to your digestive system and enjoy a better life.