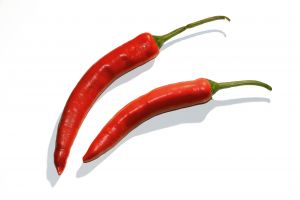 Chilli peppers are one of the most controversial foods in the Paleo diet community. Technically, chilli peppers belong to the genus capsicum. They are not really peppers ? they are berries produced by nightshade plants. The hot taste of the chilli pepper is caused by a group of compounds known as capsacinoids, and the health benefits and risks associated with consuming capsacinoids are hotly debated.

Where do Peppers Come From?

The chilli plant is native to Central America, and chefs from the region have used its peppers as a key spice in their dishes for centuries. The plant was exported from Mexico to Spain and Portugal during the late 16th and early 17th century, and it is now a popular commercial crop that is enjoyed all over the world. Chilli peppers can be thermogenic, so in recent years they have become a popular weight-loss aid.

The capsacinoids in the peppers can damage the lining of your intestines, making it easier for other compounds to penetrate that lining and increasing your risk of developing food allergies and intolerances. The association between a “leaky gut” and certain auto-immune conditions, as well as heart disease and chronic inflammation, is well known. What is unclear is whether the amount of capsacinoids in peppers is enough to do significant harm to your digestive system. If you feel you have digestive problems, cutting out peppers could relieve them.

Fresh capsicum peppers are high in vitamin C, and contain a lot of vitamin B6, vitamin A, iron, copper and magnesium. The antioxidants in the peppers can help to protect your body from damage by free radicals, and the vitamin C is important for the production of collagen, which is a structural element of skin, bones, blood vessels and even organs. Recent laboratory studies suggest that eating peppers could help to reduce your LDL cholesterol levels, and may even help to reduce your risk of developing diabetes.

Since they are part of the nightshade family, along with potatoes, many Paleo diet followers choose to avoid eating chillies. The nightshade family includes eggplants, tomatoes, green peppers and all capsicum peppers. If you choose to follow an autoimmune-focused Paleo diet you should avoid those foods as well as any condiments and spices which contain them.

Some Paleo diet followers relax the rules slightly to allow the consumption of peppers in moderation. If you feel that your digestive system is healthy, and you want to consume peppers in moderation, then by all means do so. Moderation, however, is key. The Paleo diet involves eating the same foods as our ancestors would have eaten back in the days of hunter-gatherer cultures. Our caveman ancestors did occasionally eat grains, berries, and fruits, but only in small quantities. When the seasons changed, their diets changed with them. Many of the problems that we experience today are the result of eating a repetitive diet that contains foods that our bodies were not designed to eat in huge quantities.