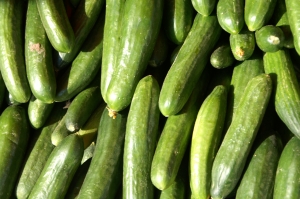 Cucumbers, also known as cucumis sativus, are one of the most widely grown plants in the world. The plant produces a cylindrical fruit which can be eaten when it is ripe. There are a huge number of different cultivars of this plant, and each produces a fruit which can be categorised as either a slicing, pickling or burpless plant.

Slicing cucumbers are designed to be eaten when they are fresh. They are long, thin and have a tough skin and a softer inside. They become sour when over-ripe but taste good in salads when consumed unripe.

Pickling cucumbers are similar to the slicing variety, except they are bred to be shorter and thicker so that they fit into the container. They are frequently referred to as pickles or gherkins. Followers of the Paleo diet rarely eat pickled cucumber because the pickling process causes the vitamin C in the fruit to decay.

The burpless variety is sweeter and softer than other varieties, has a fairly thin skin and contains far fewer seeds. The name “burpless” was coined because the low seed content makes this variety perfect for people who are prone to gas or indigestion after eating other varieties of this fruit.

The Health Benefits of Cucumber

As with most fruits and vegetables, cucumbers contain a lot of water, as well as fibre, vitamin B and vitamin C. This means that they can help to rehydrate you and protect your skin and hair. They also contain lariciresinol and pinoresinol, important ligans which are thought to have cancer-fighting properties.

Their high fibre and water content mean that they help to fill you up without overloading you with calories. If you are trying to lose weight while following the Paleo diet, then fibre-rich salads are a good choice as a side or even an occasional main meal.

While most people use this humble fruit in salads, you don’t have to limit yourself to raw, cold salads when you are on the Paleo diet. You can add cucumbers to almost any meal. Simple salmon cucumber bites (slice some cucumber, add a dash of spicy salmon and some sliced tomato on top) are a convenient and tasty snack, and you can also serve cucumbers with pork, chicken noodles, and even avocado and cilantro. Smoothies made with cucumber, lemon, parsley, kale and spinach are incredibly popular “pick-me-ups” too.

Some people are wary of eating certain salad fruits and vegetables because of the risk of contamination with e-coli. In 2011 there were several cases of e-coli poisoning caused by contaminated cucumbers, radishes and other vegetables. The World Health Organization acted quickly to control the outbreak, and there are strict controls on the import and export of raw foods.

There is no need to worry about the risk of e-coli or other serious health risks from foods sold in supermarkets in the UK. If you are concerned about the safety of the food you eat, wash it before cooking it and take care to store fresh meats and vegetables separately.