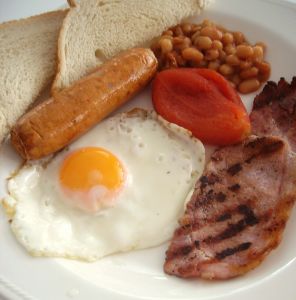 A full English breakfast is a hearty meal which typically consists of bacon, eggs, sausages, `grilled tomatoes, fried mushrooms, baked beans and some toast or fried bread. Some people also include ?hash browns? (a form of potato cake) and black pudding in their definition of a full English breakfast, and the meal is typically served with a cup of tea or coffee.

Almost everything in this breakfast is prepared by frying it, so the meal is colloquially known as a “fry-up”. Compared to continental breakfasts, it is incredibly calorie-dense, with even small breakfasts served in restaurants and hotels containing as many as 800 calories, and some coming in at over 1,000 calories. However, this may be no bad thing for a manual labourer or someone who engages in an intermittent-fasting version of the Paleo diet that involves consuming the majority of your calories in one small feeding window.

This traditional breakfast is very calorie-dense and it also contains more than 90g of fat. This has led to many experts decrying the meal as a potential killer, but that is not necessarily the case. Fat-rich breakfasts containing a lot of fried food were historically a part of the British diet because for many years heavy industries such as mining and shipbuilding were a major part of English culture, and manual labourers needed those calories because they burned more than 5,000 calories per day. Today, now that most of us live more sedentary lifestyles, a calorie-dense breakfast may not be a good idea for someone watching their weight.

Having said that, the fat content of the full English breakfast is not a bad thing by itself. The breakfast is high in protein and the egg, tomato and mushroom are all rich in vitamins and minerals. Eating a diet rich in fat will not make you fat, and the latest research suggests that there is no clear link between dietary cholesterol and blood cholesterol. So as an occasional treat a fried breakfast should not be harmful. It is important to note that a full English breakfast also contains more than 40g of sugar and a large amount of salt, so you should be mindful of what else you indulge in that day if you eat one.

The traditional full English breakfast would not count as Paleo because it includes toast and potatoes, which are not considered to be a part of a truly Paleo lifestyle. However, these elements of the meal could be removed and replaced with onions or some other Paleo-friendly food.

In addition, if you do decide to try fry-ups, be mindful of the meats that you choose (try to source German sausages and meats from ethical local farms) and the oil that the meats are fried in. Avoid processed “low-cholesterol” oils and try to use olive, coconut or avocado oil. Alternatively, you can lower the calorie count of the meal by choosing to grill instead of fry. The full English can be an enjoyable treat, but shouldn’t be consumed on a daily basis.