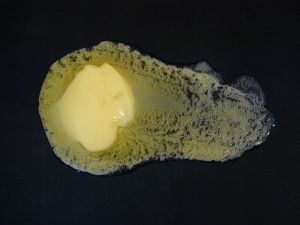 Ghee is a popular cooking ingredient in South Asia. It is a form of clarified butter that is made by boiling normal butter and removing the resulting residue. Many forms of ghee have spices added to them for extra flavour. This butter keeps for a long time and if it is stored in a sealed container it does not even need refrigerating.

The Hindu religion places a lot of emphasis on this ingredient. It is made from cow’s milk, which is considered to be sacred and is used in many ceremonies and religious celebrations. Indians also like to use it in many of their traditional dishes as a glaze, an oil for frying or an ingredient to add moisture and richness to a recipe.

Ghee Is Not Bad for You

In recent years, this clarified butter has had some bad press because of concerns about the amount of fat in it. However, recent research conducted by the National Dairy Research Institute has found that in moderation it can be quite good for you. This clarified butter is rich in Conjugate Linoleic Acid (CLA), a substance that can help to cut your risk of some cancers.

There is no risk of heart disease from consuming fatty clarified butters. Dietary fat and cholesterol do not increase blood cholesterol in people who are otherwise healthy. Calorie-dense foods can cause weight gain, but only if your daily calorie consumption is higher than it should be.

Ghee in the Paleo Diet

Traditionally, dairy products are not a part of the Paleo diet. However, clarified butter is sometimes treated as an exception. The clarification process removes the dairy proteins, which are the things that cause so many problems for lactose-intolerant people, leaving only the healthy fats.

If you follow the Paleo diet, you can fit clarified butter into your diet, as long as it is consumed in moderation. Many people like to use it as a fat for saut?ing, roasting and other forms of high-temperature cooking.

Making Your Own Paleo Butter

If you don’t like buying supermarket clarified butter, you can make your own quite easily and doing so is definitely compatible with the Paleo lifestyle. All you need is some butter (ideally organic, grass-fed butter) and access to some basic equipment such as a strainer and some cheese cloth.

Simply melt the butter, slowly and gently, in a pan and then use a slotted spoon to remove the froth that has bubbled up to the top. Line your strainer with some cheese cloth and then pour the butter through the strainer. Let the water and the fat separate and then spoon off the butter and store it in an airtight container.

If you want to add some flavour to the clarified substance, do this by boiling the butter with some herbs in it. There are many herbs that work well for this purpose. Popular choices include garlic, cardamom, jalapeno, mint and even ginger. Take care not to use too much spice, because it is easy to overpower the taste of the butter.