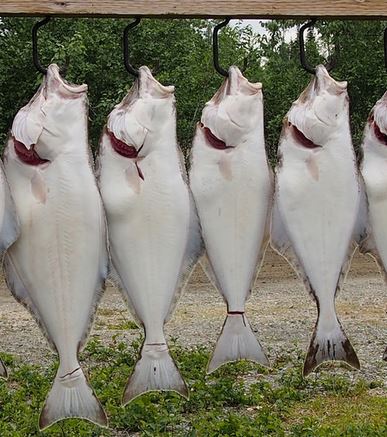 Halibut is a form of flatfish that belongs to the family of flounders known as Pleuronectidae. The name halibut comes from the term haly (meaning holy) and butt (meaning flat fish), and it earned this name because it was commonly consumed on Catholic holy days.

These fish are found in the North Pacific and in the North Atlantic, and they are an incredibly popular food fish. Their popularity can partly be attributed to their size. They are very large flat fish. The largest fish is one that was found on July 4th, 2013. It weighed 515lb and was 9ft long. This fish is 100lb heavier than the world record that is currently recognized by the IGFA, and the catch is currently awaiting certification.

Over-fishing is a serious issue across the world. In the mid 1990s, the US allocated individual fishing quotas to fishery participants. Theses quotas were based on each vessel’s previously documented catches and allow each vessel to catch a certain amount of fish during the nine-month-long fishing season. In addition to these industrial fishing quotas, there are also sport fisheries that take their toll on the world’s halibut population. Sport fishing is popular in Alaska and British Columbia and can be damaging to the population because it is mostly the smaller, younger fish that are caught by sports fishermen.

A single serving of this flat fish weighs just 159g and contains 223 calories, of which 42 come from fat. These fish are a good source of protein, calcium, iron and vitamin A. In addition, they are rich in protein, with a serving offering 42g of protein and just 5g of fat, of which just 1g is saturated fat.

If you are looking for a lean source of protein, then this affordable flat fish is a good option, and one that is versatile enough to be used in a wide range of dishes, ensuring that you never get bored of eating it.

There are many ways to prepare this flat fish. You can serve it on a salad, pan-sear it and serve it with sweet corn, grilled peppers or olives or top it with pesto. This fish also tastes great steamed, grilled, or poached and goes well with lemon, pepper, zucchini, tomatoes or salsa. It has a relatively mild flavour, so it tastes good with tangy, spicy, salty or creamy toppings and a huge range of side dishes.

One good option is to marinate chunks of the fish in your favourite sauce or spice, and then serve them with some freshly prepared vegetables.

As with other fish, one of the main reasons that people enjoy eating this popular flat fish is the density of omega-3 fatty acids found in them. This healthy fatty acid helps to improve the health of your cardiovascular system by improving the ratio of good HDL to the less-healthy LDL.

This fish is also a source of vitamin B12 and B6, as well as folic acids. These nutrients help to lower your homocysteine levels, preventing damage to your artery walls.

Other nutrients that are found in this fish includes magnesium — a calcium channel blocker that helps to improve blood flow, thereby helping oxygen and essential nutrients to make their way through the body.

There is some evidence to suggest that the nutrients in this fish can help to prevent age-related macular degeneration, reduce dry eye syndrome, reduce your risk of suffering from a stroke and protect against cancers of the digestive tract as well as ovarian cancer. More research into the cancer-fighting properties of fish is required.

There are some people who should avoid eating lots of halibut, however. In particular, pregnant women are advised to avoid fish in general because of the amount of mercury found in most fish. High blood mercury levels can be harmful to the unborn baby and can also cause side effects for the mother, including joint pain, fatigue, memory problems and headaches.

People who are sensitive to purines should avoid this kind of fish. Purines break down in the body to form uric acid, which can contribute to gout and cause the formation of kidney stones. If you suffer from kidney problems, or have a history of gout, then avoiding purine-rich foods may be a good idea.

Halibut are a great source of nutrients for people who are following the Paleo diet, but you should choose the fish carefully. The best fish to choose are ones that are caught in the Pacific. Currently, the population in the Atlantic is incredibly depleted thanks to overfishing; in fact, there are some concerns that the fish may become an endangered species. If you are environmentally conscious, then you should avoid flat fish that were caught in the Atlantic.

There is some concern at the moment about an issue called “mushy halibut syndrome”, which refers to fish that have a jelly-like consistency. When these fish are caught, they fall apart instead of flaking. The fish are safe to eat, but they do not taste or look as good as better-quality ones. It is thought that this poor meat consistency may be related to a change in the diet of the fish.

The best way to eat fish is to purchase them fresh and cook them as promptly as possible, but this is not always easy to do. If you are preparing frozen fish, take them out of the freezer, unwrap them and rinse them in cold water and then pat them dry before cooking. Do not defrost the fish. Make sure that you cook the fish slowly to ensure that it is warmed all the way through before you eat it.