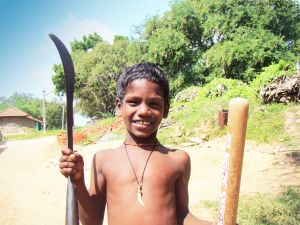 In 2011, it was estimated that 16.3% of children were obese. And the number of primary school children who are classed as overweight or obese is increasing steadily every year.

Child obesity is a serious problem. According to the British Heart Foundation, people who are obese in childhood are more likely to become obese adults and adult obesity leads to an increased risk of developing heart disease and type 2 diabetes.

The Cause of Childhood Obesity

Childhood obesity is a bigger problem in urban areas and in areas where income is lower than average. Parents in those areas struggle to control their child’s weight for many reasons, including a lack of education about nutrition, limited access to nutritious foods and limited time or facilities for cooking.

Another major contributor to child obesity is the relatively recent shift to a sedentary lifestyle. A growing number of children are choosing to play on games consoles or iPads after school, instead of playing sports or running around outside.

Children have quite specific nutritional needs. Because their bodies are still developing, they need to eat a diet that is rich in protein and healthy fats and they should eat at least five portions of fruit and vegetables per day.

The NHS recommends that a child consumes 1,800 calories per day. The Paleo diet is a good way to get these calories. A lot of the artificial flavourings added to children’s ready meals and snacks are chemicals that can create cravings and some E-numbers have been linked to behavioural problems in young children.

The key principle of the Paleo diet is to avoid processed foods. If your child does not regularly consume grains, sugary foods or anything that contains artificial colours, flavourings or preservatives then they will not be exposed to the sweet tastes and insulin spikes common with so many “child-friendly” snacks.

Is the Paleo Diet Safe for Kids?

The Paleo diet is a great option for children. Paleo foods provide young bodies with all of the macro- and micro-nutrients that they need. In addition, Paleo foods do not contain gluten and lectins, which are gut irritants that can be harmful to a child’s not-yet-developed immune system.

If you start a child on breast milk and transition to simple Paleo staples such as egg yolk, bananas and avocados as they grow up, then you should find it easy to stick to a Paleo diet as they get older.

Transitioning to Paleo with an older child can be difficult, especially if they are used to eating whatever food they prefer. A child will see the sudden ban on Cocoa Pops as an arbitrary restriction and will most likely not be enthusiastic about having to eat real fruit and vegetables. It can be helpful to explain the science behind Paleo (in simple terms) and gradually move towards to a Paleo diet.

Start with a healthy breakfast and once they’re used to that, start packing them a Paleo lunch for school. This will be much easier than taking a cold-turkey approach.