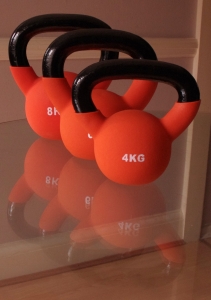 Kettlebells are form of cast-iron weight that are used for strength and conditioning training. A kettlebell looks like a cannon ball with a large handle on top. Kettlebells were originally made by Russians in the 18th century and were used to weigh crops. Farmers began to use them to show off their strength, cardiovascular endurance and power during celebrations and festivals, and as a result they became a popular tool for physical conditioning training, even being adopted by the Soviet army.

Today, there are entire training programs based around the kettlebell, and athletes can even earn certifications that rank their fitness based on the number of repetitions of a particular exercise they are able to perform in a time limit. Kettlebell exercises differ from simple compound barbell moves because they engage the entire body. A kettlebell swing, for example, employs the lower back, legs, shoulders and also grip strength, as well as recruiting stabilizing muscles.

Where the squat, bench and dead lift trained at 3 to 5 repetitions per set focuses only on maximal strength, kettlebells are more a form of high-intensity interval training. They can burn as many as 13.6 calories per minute during a workout, which is similar to the number of calories you would burn jogging a ten-minute mile.

Kettlebell exercises are a great choice for anyone that wants to build functional strength. Just as the Paleo diet is a diet that focuses on living a lifestyle that is as close to nature as possible, kettlebell exercises replicate real-world movements and get your body moving in the way it was designed to move. When you lift weights using a machine instead of a barbell, dumbbell or kettlebell, you are forced to follow the movement path of the machine and are restricted to its range of motion. If you are lucky enough to be exactly the right size for the machine, then this is not an issue. However if you are not ?average? sized, or if the machine is not configured exactly for your use, then you could be at risk of injury when performing even relatively simple lifts.

Kettlebell exercises recruit a wider range of muscles and allow you to move naturally. Think of them as being like a Paleo diet for your muscles. Each swing, snatch or other lift recruits all of the muscles necessary to keep your body safe, strong and supple. You will not have to worry about developing strength imbalances or putting your body under undue strain.

You can buy kettlebells in a range of sizes, from smaller 2.5kg ones for beginners up to 20kg and beyond for advanced users. Experiment with a few different sizes until you find one that challenges you. Note that it is common for beginners to choose a weight that is too light. You should be able to perform the exercise with correct form for a few repetitions, but the weight you work with should be heavy enough that fatigue does set in after a few minutes of work.