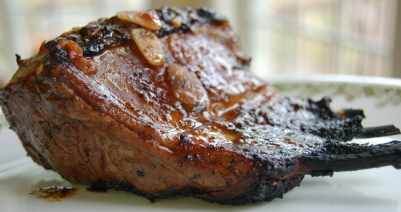 Lamb is a term that is used to refer to the meat of a domestic sheep during its first year of life. Meat from slightly older sheep is called hogget, and meat from adult sheep is called mutton. Lamb is a mild, tender meat, and it is the most highly desired of the sheep meats.

Where the Meat Comes From

This meat comes from animals when they are between one and twelve months old. Typical carcass weights are between 5.5kg and 30kg. The meat is usually quite tender and has a mild flavour, which is caused by a lower concentration of fatty acids when compared to older sheep.

There are kosher and halal versions of this meat available, and the primary difference is in how the animal is slaughtered and the meat prepared.

This meat is an excellent protein source. A four-ounce serving contains around 27.5g of protein, which is more than half of the RDA of protein for a healthy adult that leads a typical lifestyle. If you are an athlete, you may need more protein to support muscle building and repair, but you can easily get this from meat.

The same four-ounce serving contains almost half of an adult’s RDA of vitamin B12, as well as a significant amount of the daily RDA for niacin and riboflavin. In terms of minerals, a serving offers one third of the RDA of zinc, in addition to a notable amount of iron and copper.

Vitamin B12 is important because the body uses it to metabolise homocysteine, and it is also used to make red blood cells and plays a role in nerve function. Niacin is used to help the body release energy from food and is essential for healthy nervous system functioning, and riboflavin helps to protect your eyesight.

Zinc is used by the body to help the immune system to function, is involved in the healing of cuts and other wounds, and is important for the maintenance of testosterone levels. Iron is essential for the health of your circulatory system, and to protect against anaemia. Copper is important for both red blood cell production and the metabolism of iron.

One little-known thing about this meat is that if you can find meat from a young sheep that was fed a healthy diet, and that came from a healthy mother, then you may get a decent dose of omega-3 fats from it. Usually, omega-3 fats come from fish, nuts and seeds, but there are other sources. Australian grass-fed young sheep are a particularly good source of these healthy fats, with a single ounce of roasted loin containing almost half of the amount of omega-3s found in an ounce of cod. This is a great way to get your healthy fats without getting bored of eating the same old fish and nuts day in, day out.

If there is one downside to this meat, it is that it is quite calorie-dense. A four-ounce serving contains ten grams of saturated fat and around 330 calories. This means that you should try to moderate your intake, because it is easy to gain weight if you eat a lot of calorie-dense foods. Lamb also contains purines, which the body converts into uric acid. Some people struggle to remove that uric acid from their bodies, and this means that they are at risk of developing kidney stones and gout. Anyone who is genetically predisposed to gout should try to avoid purine-rich foods.

It is important to remember, however, that in spite of what we were taught when we were growing up, saturated fats aren’t the enemy, so you don’t have to be too concerned about the fat content as long as you are not trying to count calories. In moderation, and as part of a healthy lifestyle, you can enjoy fatty meats. The key here, of course, is making sure that you do not over-eat.

Sheep Meat and the Paleo Diet

Sheep meat (of all varieties) can be a good part of the Paleo diet. It is best, however, if the meat comes from grass-fed sheep that were allowed to roam on open land for most of their lives. Sheep that are raised on intensive farms are often fed less nutritious food and pumped full of antibiotics. This means that their meat is of a lower quality, and that it is likely to contain traces of the drugs that the sheep was fed — traces that can make it into our own bloodstreams.

However, if you can find high-quality meat that has been raised ethically, it can make a great addition to your diet. Following the Paleo diet means eating foods that are as natural as possible, such as fresh organic vegetables, grass-fed or free-range meat, ethically caught fish and some fresh fruit, nuts and berries. Highly processed foods, grains or foods with artificial flavourings and colourings are not considered to be a part of the Paleo lifestyle.

When you are shopping for meat, look for 100% grass-fed animals, ideally from a local butcher. Don’t be fooled by labels that say things such as “natural” or “grass-fed” without a percentage, and ignore “pasture-raised” too. These labels do not mean anything. The law does not place limits on the amount of time that an animal must spend on pasture, or how much grass it should eat, in order to use such phrases. The only way to be certain that you’re getting meat from an animal that was 100% grass-fed is to pay the premium and buy from a reputable supplier such as a local farm that has a small flock.
photo credit: 20070714 lamb 02 via photopin (license)