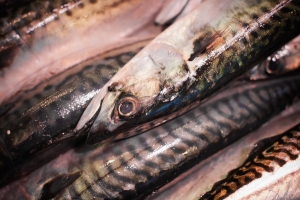 Mackerel is the common name which is given to a type of fish found in both temperate and tropical waters. Most of the fish given this name belong to the Scombridae family of pelagic fish, but there are some other families, such as Scombrini, that are given the label too.

The History of Mackerel

Humans have consumed this oily fish for several centuries. Historically, most cultures would salt or smoke the fish to preserve it, but in England it was almost always eaten fresh. Because of the lack of preservation techniques, references to the strong odour of the fish are common in historic English literature. In French culture, pickling was common and in tropical climates it is cured to reduce the risk of scombroid food poisoning.

Mackerel are oily fish that are rich in Omega-3 and Omega-6 fatty acids. The fish also contain vitamins A, B6, B12, C, D E and K. It is also a good source of Coenzyme Q10, calcium, magnesium, iron, potassium, phosphorus, selenium and sodium.

There are many health benefits associated with this fish. In particular, the balance of healthy fats in the fish can help to improve your cardiovascular health, lowering the levels of bad cholesterol in your blood stream and boosting the good cholesterols. The anti-oxidants, vitamins and minerals in the fish are thought to boost your immune system.

Coenzyme Q10 is thought to have anti-cancer properties and the Omega-3 fatty acids can be an effective anti-inflammatory, helping to reduce your risk of heart disease and even reduce the symptoms of arthritis. There is some evidence to suggest that the nutrients can help with brain health, even improving memory and cognitive function in Alzheimer’s sufferers.

Fish and the Paleo Diet

Fish can be a good part of any Paleo diet, as long as they are ethically caught. Traditionally, this particular fish has a long history of being thought of as a healthy, ethical and sustainable food. However, in recent months this image has taken something of a hit because the Marine Conservation Society has raised concerns about over-fishing in British waters. Currently, the species has a “yellow” rating according to the MCS, meaning that it is all right to consume the fish occasionally as long as it was caught in British, Norwegian or European waters. Fish caught in Icelandic or Faroese waters are to be avoided.

From a health standpoint, mackerel is a great food, but the ethics of overfishing and the quality of the waters that the fish are caught in are something that Paleo diet followers should give some thought to. Sustainable fishing practices are worth supporting to ensure that we can enjoy a varied and healthy diet for many generations to come. As with other fish, such as tuna, there is some risk associated with eating large quantities of mackerel that come from waters which contain a lot of mercury. Children, in particular, should avoid eating large quantities of oily fish because the mercury in them could damage their developing nervous systems.