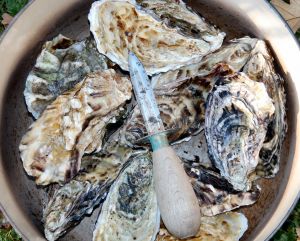 Oysters are a popular and luxurious shellfish that can be consumed cooked or raw. They are considered a delicacy today but have been an important part of human diets throughout history. In the year 2000, a team of anthropologists and geologists unearthed evidence of an “oyster bar” on Africa’s Red Sea coat. The tools and shells found in the area suggest that humans were eating oysters, clams and other shellfish as early as 125,000 years ago. This means that shell fish can most definitely be considered a part of the Paleo diet.

Today, the oyster is best known as being an aphrodisiac, and there is some evidence to support this old wives’ tale, since they are rich in zinc, a mineral that is used in the production of testosterone. However, oysters have many other nutritional benefits.

A serving of four average-sized Pacific oysters contains an incredibly impressive amount of nutrients, including:

The nutrient profile of this popular shellfish is quite impressive, and should make it easy to understand why ancient civilizations would actively seek it out and eat it in large quantities. Ancient civilizations needed proteins and fats in quantity to sustain their lifestyles. The healthy fats, as well as the fat-soluble vitamins and minerals and the large amount of protein in each serving, mean that the oyster is a great addition to any meal and can be a regular part of your diet.

Fresh oyster can be quite expensive when it is purchased from traditional supermarkets, but you can also find oyster being sold at more reasonable prices at markets and specialist Asian retailers. If you do not have access to such markets or retailers, purchasing farmed oysters from a supermarket is an acceptable option. Unlike poultry and cattle, which tend to live far less than natural lives when they are raised in an unnatural environment, shellfish raised in farms live a life that is relatively similar to the life they live in the wild.

If you are following the Paleo diet, it is always a good idea to try to get grass-fed beef, truly free-range chicken raised on organic feed and salmon caught ethically in the wild. Shellfish, however, can be purchased from a farm without concern because they are fed similar foods to what they eat in the wild and are raised in similar waters.

One benefit of oyster over other fish is that they tend to contain far fewer toxins. The oyster takes in toxins and processes them, rendering them inert, whereas other fish absorb the toxins into their meat. If you are concerned about the pollutants in tuna and other fish, then eating oyster instead is a good idea.