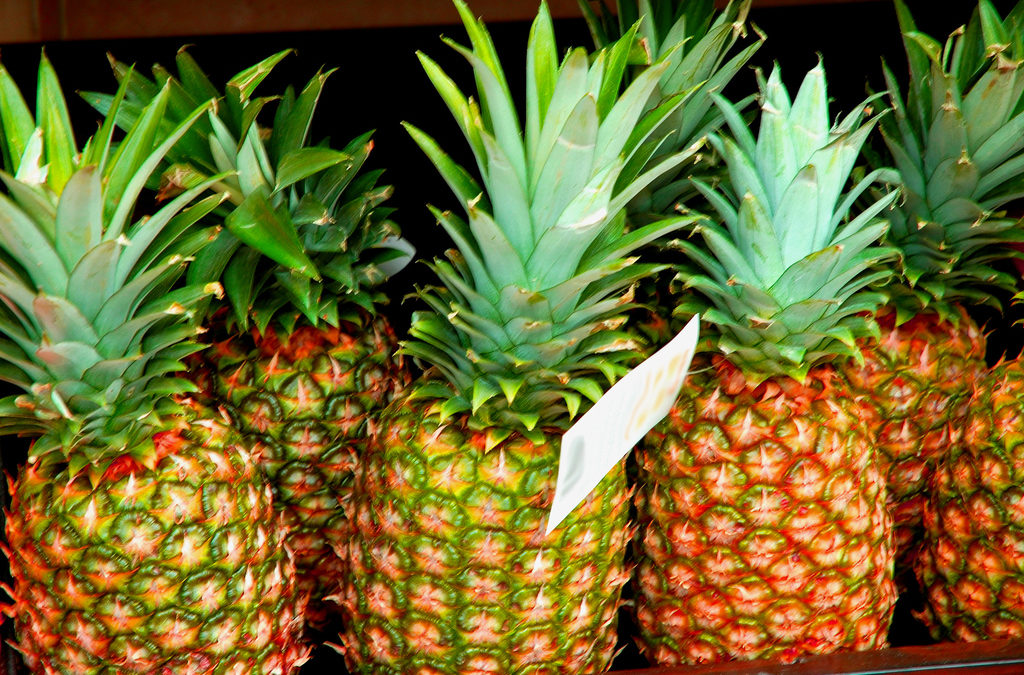 Pineapples are tropical plants that produce edible fruit. The large and prickly fruits that we think of when we hear the term pineapple are actually coalesced berries. In the western world we simply eat the fruit (or drink the juice), but in the Philippines the entire plant is considered useful. The leaves are harvested to produce a textile fibre that is used in wallpaper and furniture.

The plant is native to southern Brazil, Paraguay and the Caribbean. In 1493, Christopher Columbus found pineapples when he landed on Guadeloupe Island. The earliest American colonists thought of the plant as a luxury because it was rare and expensive, but today it is a fairly common fruit.

Pineapples spread from southern Brazil and Paraguay to reach the rest of South America, Central America and Mexico many centuries ago. The Mayans and the Aztecs are thought to have cultivated pineapples as a crop. When Columbus discovered the fruit, he brought it back to Europe, and from there the Spanish introduced it to Hawaii and the Philippines. Europeans learned how to cultivate pineapples in hothouses and specially created pineapple pits in the 1720s. The first commercial plantation of pineapples in Hawaii was created in the late 19th century.

Dole and Del Monte, two of the most well-known pineapple-growing companies in the world, were founded in the early 1900s. Dole was founded in 1901, while Del Monte was founded in 1917. Dole originally had just 60 acres of land, but today they are an international power house. Dole and Del Monte were a part of an organization known as the Pineapple Research Institute, but this organisation was dissolved in 1986, and the assets (including various varieties of plant) were divided between the companies that had contributed to it. Many of the varieties that are being bred today, such as the Gold Extra Sweet variety, are not pure pineapples at all, but hybrids that have been created via an extensive breeding programme. Most of the pineapples found in supermarkets in the USA and Europe are a hybrid, low-acid variety that was developed in the 1970s in Hawaii.

Today, pineapples are an intensively farmed crop. In 2009, Brazil produced more than 2,200 kilotonnes of the fruit, while the Philippines produced 2,198 tonnes and Thailand produced 1,894 tonnes. To speed up fruit production, many farmers artificially induce flowering, harvest the first fruit early and then encourage the development of a second, smaller crop of fruits. Once the fruits have been removed, the top of the pineapple can be planted to grow a new plant.

One thing that Paleo diet followers should be aware of is that pesticides are heavily used in the growth of pineapples. Many farmers use as much as 20kg of pesticides per hectare, and this puts a lot of stress on the land, potentially damaging local water supplies. There are some concerns that pesticide use could be linked with cancer in farm workers and with birth defects in areas near farms.

One cup of pineapple contains approximately 80 calories, as well as more than 100% of your RDA of vitamin C and a small amount of vitamin B-6, magnesium, calcium, vitamin A and sodium. They also contain manganese — a nutrient that is an essential ingredient in several enzymes that are required for energy production.

Pineapples are sweet, but the sugar is released slowly because the soluble fibre in the fruit slows down the rate of release. This helps to prevent spikes in blood sugar and insulin levels which might otherwise encourage the body to hold on to its fat stores.

The bromelain in the fruit helps to ease inflammation, which means that it can help to reduce the pain of arthritis. In addition, pineapples are rich in vitamin C, which can help to boost your immune system. It is important to note that some of the beneficial enzymes in fresh pineapples are destroyed during the cooking and canning process, so if you want to ensure that the food is as beneficial as possible for your health, then you should try to eat it fresh.

Pineapples and the Paleo Diet

The Paleo diet is a diet which involves eating foods that are as close to nature as possible. In essence, it advocates eating in the way that our caveman ancestors did. Modern western diets are rich in grains and dairy products as well as artificial sweeteners, colours and flavourings that our bodies are not really designed to be able to process. The Paleo diet takes a back-to-basics approach and advocates avoiding those substances in favour of simpler and more nutritious foods.

The core of the Paleo diet is meat. Ideally, you should consume grass-fed beef, free-range chickens and other meat reared in as natural and animal-friendly ways as possible. However, vegetables, nuts and berries are also important. Fruits are considered all right to eat in moderation, but the best fruits to eat are ones that are in-season in your area. Many Paleo followers avoid eating large amounts of fruit because a lot of them are high in sugar. While getting your sugar from fruit is better than drinking soda or eating a chocolate bar, if your goal is to lose weight by eating Paleo, minimising your sugar intake is a good idea.

Pineapples are among the fruits considered quite safe for Paleo followers. The amount of fibre in it means that it releases its sugars more slowly than other fruits, and the luxurious taste makes it a great dessert option. However, you should still try to keep track of the amount that you eat, and try not to over-indulge.

Deciding Which Fruit to Eat

The best fruits to eat are the ones that have a pleasant smell associated with them. Sour-smelling or bruised fruit is best avoided. Choose fruits that are grown locally for optimum freshness. If you have the opportunity to do so, leave the fruit at room temperature for a day before you cut and prepare it, so that it tastes soft and juicy.