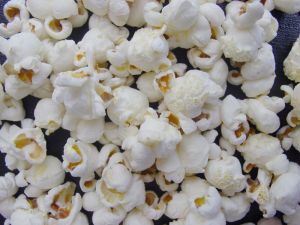 One of the hardest things about following the Paleo diet is finding foods that you can eat when you’re out with friends. Socialising and food are inextricably linked in Western culture. For example, many people associate a trip to the cinema with drinking a large soda and eating popcorn. It’s common knowledge that soda is far from healthy, but what about popcorn? Does that have a place on the Paleo diet?

There are several different flavours – salted, buttered, caramelised and even spiced. Surely one of those flavours is healthy?

Popcorn has received a lot of positive press in the mainstream media because it is a good source of anti-oxidants in the form of polyphenols. Unfortunately, those polyphenols are found in the hull of the kernel, and that hull is made of insoluble fibre. This means that your body doesn’t really digest it very well, so you’re not getting much benefit from eating them.

Another thing that many people like about this snack is that there are some vendors that sell corn that is popped using coconut oil and topped with sea salt and real butter. That sounds like a pretty natural snack, doesn’t it?

And Now for the Bad

Sadly, it is not the cooking process that makes popped corn bad for you; it is the corn itself. Corn contains phytic acid. This is an acid which can chelate some minerals, preventing your body from absorbing them. Cooking corn does reduce the phytic acid content by as much as 52%, but it does not get rid of it completely. Why would you consume foods that prevent your body from absorbing nutrients?

Another thing to consider is the possibility that the corn you eat may contain gluten. Air-popped corn should be gluten-free, but you have no idea what is added to the corn when you buy it at the cinema. Many flavours of corn have added ingredients, which could include gluten.

Corn that is microwaved is far worse than corn that is cooked traditionally. Most microwaved corns are flavoured with a fake form of butter called diacetyle, which is thought to exacerbate the development of Alzheimer’s disease. In addition, the bags used to pop corn in a microwave often contain PFOAs, which are a component found in Teflon and thought to be carcinogenic.

Not the Worst Food in the World

Traditionally popped non-GMO corn, flavoured with real butter and salt, and popped with coconut oil, is not a perfect Paleo snack, but it is not the worst snack that you could put into your body. If you are craving a cheat meal, or you need something to eat at the cinema, then this kind of corn is a better choice than sweetened corn, sweets or a hot dog.

Ideally, you should avoid all corn snacks while you are on the Paleo diet, but almost everyone needs to cheat from time to time. Of course, following a pure Paleo diet is the ideal choice, but if you must cheat, then choose the least harmful snacks.