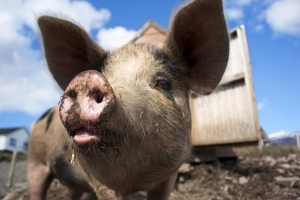 Pork is a meat that has a rather bad reputation. There are several religious diets that forbid the consumption of pork and even people who are not religious consider it to be a “dirty” or “unhealthy” meat for various reasons. While there is some truth behind the idea that excessive pork consumption can be unhealthy, pork can make a good addition to the Paleo diet.

Religious Beliefs and Dietary Restrictions In the bible, it is said that the pig is unclean and therefore should not be eaten. This is the reason that Jewish and Muslim people choose not to eat it. There are several possible cultural reasons behind the statement that pork is unclean. Keeping pigs would have been difficult for people in the past and since wild pigs were omnivores, eating anything that they came across, it’s easy to understand how they would be deemed unclean.

In recent years, pigs have been marketed as a healthy alternative to beef. However, there may be some dangers associated with eating a lot of this kind of meat. High consumption has been associated with several diseases, including cirrhosis of the liver and liver cancer. But the research that this is based on did not track which form the meat came in. It is likely that the problem was not the meat itself, but rather the nitrates that are added to it. Lunch meat, cured meats and even some sausages have nitrates added to them and those nitrates convert to nistrosamines, which are associated with cancer.

Fresh meats can be dangerous too, because of the risk of Porcine Reproductive and Respiratory Syndrome infection, the Nipah virus, the Menangle virus and Porcine Endogenus Retrovirus. However, these infections can be avoided if you purchase your meats from a reputable source and cook them properly.

If you choose fresh meat that is reared and slaughtered ethically and fed a natural diet, then you can enjoy this meat as a part of a healthy Paleo diet. A three-ounce serving contains 140 calories, three grams of fat and 65 milligrams of cholesterol. The serving contains 43 per cent of the average man’s daily protein intake, as well some B vitamins and zinc. Protein is important for building muscle, while B vitamins contribute to your neurological and cardiovascular health and zinc is an essential part of your immune system.

Pigs and the Paleo Diet

The Paleo diet focuses on eating “real foods” ? that is foods that a caveman would have been able to eat. Cavemen could hunt and kill pigs if they wanted to and the pigs that they killed would have been very different to the ones that are kept locked up in farms today. Fresh meat from ethical farms is not bad for you ? it is the way that animals are kept and the way the meat is treated on the way to the supermarket that cause most of the health problems that we blame on pork today.