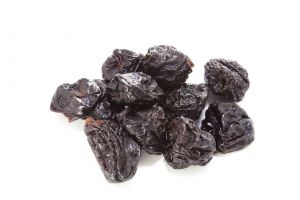 Prunes are perhaps the least glamorous of all of the super-foods. Most of us appreciate that prunes are a “healthy” food, but they’re not something that people rush to include in their diet the way they might include asparagus or acai berries.

Prunes are best known for their ability to relieve constipation. Prune juice is often touted as a healthy way to regulate your bowels, but there are other health benefits associated with this fruit, and some of them are interesting enough that they may motivate you to include an occasional serving of them in your diet.

The laxative effect of prune juice comes from the fact that it is high in fibre and that it contains sorbitol, a natural colonic stimulant. Fibre is good for you even if you are not suffering from constipation, and sorbitol can help to reduce your risk of developing haemorrhoids and colorectal cancer. That’s not to say that you should regularly supplement your intake of sorbitol-rich foods, but occasional exposure will certainly not do you any harm.

One final, little-known benefit of eating prunes is protection against osteoporosis. A study conducted at Florida State University found that women who consumed 100grams of dried ones a day for three months saw improved bone formation markers, as compared to a control group that ate dried apples instead. It is thought that the trace amounts of boron and potassium contained in the dried fruit helped to promote bone health.

Fruit on the Paleo Diet

The Paleo diet is a diet which involves eating foods that are as close to their natural state as possible. The philosophy taught by the Paleo diet is to ask “would a cave man have eaten this?” before consuming something yourself. This means that you should avoid processed foods, artificially flavoured or coloured foods and also produce that is out of season in the area that you live.

Typically, the Paleo diet teaches that you should avoid exotic fruits and dried fruits in favour of fresh vegetables and fresh local fruits. However, the humble prune is something that many Paleo diet followers make an exception for. The prune contains a lot of fibre and has a low GI rating, making it a much better choice than many other fruits when you are looking for a sweet treat.

If you want to follow a true Paleo lifestyle, then you can find better sources of fibre, including pumpkin, spinach and even rhubarb. However, if you are willing to relax the Paleo diet rules slightly, prunes are better than most other dried fruits. It all depends on how restrictive you want to be. There is no harm in making an occasional exception, as long as you understand what you are putting into your mouth, and why it matters.