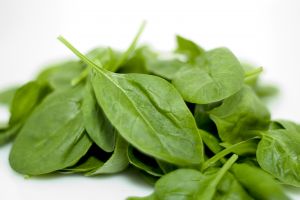 Spinach is a core component of the Paleo diet. It became famous thanks to the cartoon series Popeye, which showed the main character gaining super-strength after eating a can of spinach. Yes, a can ? not even the fresh stuff! Popeye’s super powers were based on a joke about the high iron content of green, leafy vegetables, and this simple joke propelled spinach to the status of a super-food decades before the term super-food had even been invented.

While no food can really give you super powers, there are some amazing health benefits to eating spinach. One cup contains 20 per cent of the dietary fibre you need for the day, as well as more than 300 per cent of your RDA for vitamin A ? a nutrient that is highly beneficial for your skin and your immune system. It is also rich in vitamin K, a nutrient that strengthens your bones and tissues and helps to fight against heart disease.

As with many “super foods”, the benefits don’t stop there. It is also a rich source of lutein, zeaxanthin and other antioxidants, which can help to prevent cataracts and other eyesight problems. In addition, this food can help to lower your blood pressure by inhibiting the andgiotensin-I converting enzyme. From fighting inflammation and eyesight problems to protecting you against anaemia and age-related macular degeneration, the benefits of eating spinach are numerous.

Is It Possible to Eat Too Much?

Unfortunately, many farms spray their plants with large amounts of pesticides these days, and these pesticides penetrate deep into the leaves, so they won’t come off through simple washing. If you cook the leaves correctly, and limit yourself to just a couple of servings per day, this shouldn’t be a problem.

It is possible to experience side effects from eating huge quantities of green, leafy vegetables, because of the large amounts of oxalic acid in them. These acids are found naturally in all plants, but the leafiest and darkest green plants contain much more than others. High oxalate levels can make certain digestive conditions, including IBS, worse. That doesn’t mean that you should stop eating your greens, however. Moderation is key and as long as you include lots of other fruits and vegetables in your diet you should have no problems.

You can add this tasty leaf to quiche, mash it with sweet potato, use it as a wrap for avocado or bacon and even have it in a salad with salmon. As with kale, this is an incredibly versatile food. Don’t make the mistake of writing it off because you were served soggy boiled goo as a child. Try it cooked saut?ed or steamed, and you’ll find that it tastes much better.

One of the beauties of the Paleo diet is the sheer range of foods that you can enjoy on it. Paleo quiche, sweet potato bombs and bacon wraps are all just as tasty and satisfying as any modern junk-food concoction, and they’re far better for your health too.