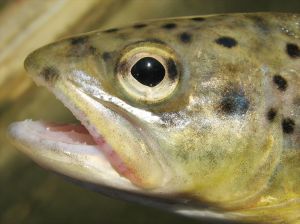 Trout is a type of freshwater fish that belongs to the Salmonidae family. It is an oily fish, and while it is considered to be somewhat bony, the flesh of the fish is tasty and is a popular part of Western diets. The British Nutrition Foundation praises trout heavily because it contains very few dioxins compared to other oily fish. Dioxins are a form of contaminant that builds up in the tissue of certain types of fish and can be dangerous if consumed in excess.

Oily Fish and the Paleo Diet

Trout are an incredibly popular form of fish, and they are caught both on a large scale and recreationally. The fish that live in open waters frequently suffer from overfishing, and in an attempt to maintain their populations it is becoming increasingly common for trout to be raised in farms and then released into more heavily fished waters. In some cases, farmed fish are sold commercially, but they are labelled as food fish.

If you are following the Paleo diet, you should ideally try to find fish that have been raised in the wild and caught in an ethical fashion. However, farmed fish are not necessarily a bad option.

An average-sized (143g) serving of trout contains just 215 calories, of which 75 calories come from fat. They are high in protein (33g per serving) and contain a good amount of healthy fats. A serving also contains 12% of your RDA of calcium and 5% of your RDA of vitamin C. While not an abundant source of vitamin A and iron, they do also contain some of those nutrients, as well as niacin, vitamin B6, selenium, and phosphorus.

One possible downside of eating this kind of oily fish is that it is high in cholesterol. However, recent research indicates that there is no clear link between dietary cholesterol and blood cholesterol, so healthy individuals should be able to eat oily fish in moderation without any problems.

The health benefits of eating oily fish are many and varied. The most prominent health benefits come from the Omega-3 oils in the fish. Omega-3 oils are considered to be important for brain and retina development, especially in young children. In addition, the oils are thought to be able to relieve the symptoms of rheumatoid arthritis, helping to reduce fatigue and swelling and improve both joint mobility and grip strength.

Other benefits of eating oily fish include improving your complexion and the health of your hair, reducing blood cholesterol levels and improving your heart health. In spite of these benefits, consumption of oily fish is still fairly low in many Western cultures. While many people appreciate the taste of the fish, the old idea that fats are bad for you is still common and is even promoted in some public health literature. The Paleo diet can help to dispel this myth. When consumed in moderation, as part of a healthy and varied diet, oil-rich fish can be incredibly beneficial to your long-term health and wellbeing.