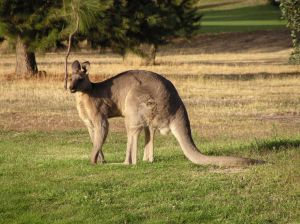 The Paleo diet involves eating natural, unprocessed foods. Ideally, you should aim to eat the same kinds of foods as your ancestors would have eaten. That means eating locally grown vegetables, grass-fed beef and fruits that are in season where you live. Why not go one step further and try some of the more unusual meats instead of ones from traditional farm animals?

Before humans kept animals for food, we were hunters and depending on where we lived, we would hunt and eat crocodiles, kangaroos, buffalo and other wild animals. While most meats are high in protein and contain a lot of important nutrients, there are a lot of good things to be said about these more unusual animals.

Kangaroo Is Good for You

Kangaroo is a lean meat that is high in protein and really tasty too. One of the best things about eating kangaroo is that they are not usually bred on farms. When you import kangaroo meat you can be confident that you’re getting meat from an animal which grew up on a free-range diet. If you struggle to find grass-fed beef and truly free-range chicken in your local stores, then imported kangaroo is a good option.

Our ancestors lived on a varied diet which included a huge range of different meats and vegetables. Modern diets are incredibly restrictive by comparison. One study conducted on Australian Aborigines who suffered from diabetes found that when they followed a “native” diet, eating a range of fresh and natural foods including crocodile, kangaroo, fish and birds, as well as fresh fruit and vegetables, they lost weight and their symptoms dramatically improved. Some of them even found that they were no longer glucose-sensitive and that their other symptoms of diabetes were also eliminated.

Other unusual types of meat, such as cuts from ostrich and buffalo, are also good choices for the Paleo diet. Ostrich meat is quite lean and while it has a high omega-six content, it is still nutritionally better than most other fowl. It also has a unique taste, so it is a good way to add some variety to your diet.

If you are an athlete, then you should try to include a lot of lean meat in your diet. Buffalo, venison, ostrich and turkey are all rich in protein. Eating lean meat is a good way to boost your intake of iron and vitamin B12 without taking in too much fat. In addition, since bison are usually grass-fed and handled by farmers as little as possible, their meat tends to contain far less in the way of drugs and hormones, making it a generally healthier choice.

Meat can be expensive and not everyone can afford some of the more unusual imported kinds. If you are lucky enough to live near a market that sells cuts of venison or bison at a reasonable price, you should give them a try. The Paleo diet is so much more fun when you can enjoy a different meat every day.