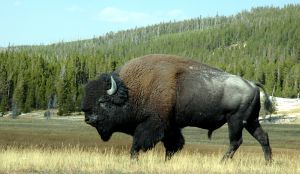 Buffalo meat is a popular alternative to beef in many parts of the United States and is becoming increasingly popular in other parts of the world. Buffalo is often referred to as bison and bison burgers and steaks can be found in many supermarkets.

Why Is Buffalo So Popular?

Buffalo is far leaner than beef and is quiet low in calories, making it an incredibly healthy choice. Most bison are raised on large, open ranches instead of the kind of intensive farms that cows are raised on. Bison are fed grass and are not pumped full of as many antibiotics as intensively reared farm animals. This means that when you eat buffalo, you are eating lean, contaminant-free meat.

If you are trying to increase your protein intake without taking your fat intake too high, buffalo is a good choice. That’s not to say that other lean meats such as chicken, turkey or venison are bad choices. However, if you’re a bodybuilder or a weight lifter there’s a high chance that you are sick of eating traditional gym-food staples such as chicken. A bison burger will be a welcome treat.

Bison meat is a great example of a truly Paleo food. Bison has been a part of human diets throughout history and the diet that a grass-fed buffalo eats today is close to their natural diet. This cannot be said for battery hens or modern cattle.

The Paleo diet is designed around a single guiding principle. If your ancestors from thousands of years ago could not access a certain food type, then we should not eat it. When you follow the Paleo diet, you eat foods as nature intended them to be eaten. Artificial colours, flavourings and preservatives are forbidden. Foods that are processed beyond all recognition and have things added to them that are so foreign to our bodies that we need chemical names to describe them are also frowned upon. All you eat is food that you can dig up from the soil, pick from a tree or catch and kill.

The staples of the Paleo diet are meat, vegetables, nuts and fruit. Following a Paleo lifestyle is good for you for two reasons. Firstly, you are not eating processed foods that contain potentially harmful chemicals. Secondly, the foods that you do eat are rich in essential nutrients such as protein, fats, amino acids and vitamins. Buffalo is one such example. The meat is rich in protein, iron and vitamin B12. This means that it helps you to build muscle, promotes a healthy circulatory system and helps to protect the nervous system too.